ECO-FASHION - CREATED FOR YOU & OUR PLANET 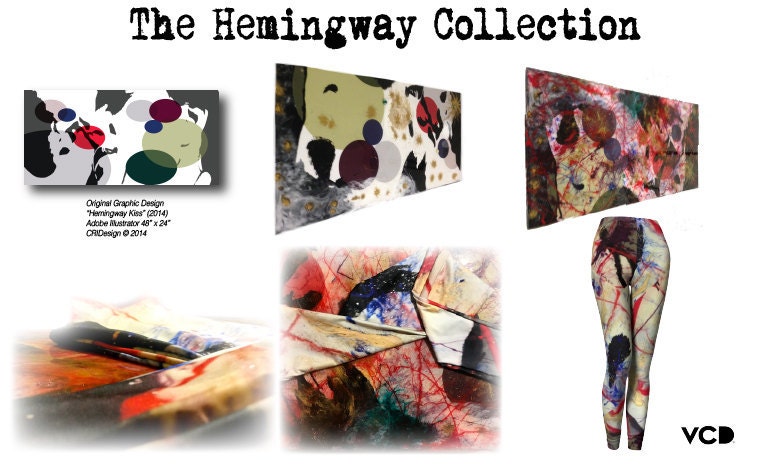 It all started with one simple design. What started with a simplistic graphic design, a vivid imagination, a hobby, and a small business dream, unleashed into an unforeseen odyssey.

It was an experiment, a test run in hopes of a solution. I was supposed to have cracked the code, and created a system where digital images, prints, and collages were all at my fingertips.

The objective was to simplify our design process, by eliminating the act of handcrafting a collage. We were going to do so digitally. Well, things didn’t go exactly as planned. It was my first time using the mysterious art medium, known as epoxy resin.

Read on to discover the history behind VCD’s “Hemingway” Collection.

Well, things didn’t go exactly as planned, which is all too typical within the design/art world.

I had started using epoxy resin as a hobby to create collage art tables, and being a graphic designer, I had to test out the mysterious art medium on one of my original designs, and so the story begin’s:

It was my first time using the mysterious art medium, known as epoxy resin on something other than a magazine photograph. I had blown up one of my graphic designs and had it printed into the size of the table. (48” x 28”).

Boy was I wrong, but I am so grateful that I was.

As soon as the clear, gooey, substance hit the canvas, the ink from my print started to bleed, and run, and much to my dismay the epoxy was literally eating away at the paper, destroying my work!

I swiftly added red acrylic paint, furiously mixing it with the epoxy resin, that was gushing off the edges of the surface, onto the floor, my clothes, and anything else in its vengeful path.

I started to scoop the excess epoxy, allowing it to drip and fall onto the paper. Applying it so quickly it, resembled some kind of forensic case file. It literally looked like Dexter had joined me and I was starring at a fake blood splatter replica.

This was not the look I was going for.

I had read epoxy begins to set immediately after combining the two part mixture. I had roughly a 10 minute window before the epoxy initiated the hardening process.

I had to act fast. Epoxy dries up quicker than a recovering alcoholic. Get it? (pun intended) Hemingway, alcohol? “The madness all over” - (Ernest Hemingway) Ok, well if my fellow LIT nerds know the deal. ;)

I reached for the black and white acrylic paint, desperately trying my best to cover up the areas where the ink had bled, and conceal the damage.

Epoxy was flowing, everywhere. I had to prevent the epoxy waterfall from destroying everything in my studio. I started to scoop the excess epoxy allowing it to drip and fall onto the paper.

However the application of the epoxy and paint mixture was actually fun! It was beginning to change forms, and starting to look pretty cool.

After all of that, it still needed something more. Over the next couple of days, I added, glitter, glass beads, in addition to several more coats of epoxy resin, and Hemingway was re-born into its next form, a table.

The table aptly named Hemingway was a hit. I received some very generous offers. It was the main attraction during our art shows and events. Hemingway was created with the intent to sell. I had listed it for sale on my website, and had it on display at my art shows, with a big SAFE price tag on the back of it, because I knew I didn’t really want to sell it. I was in love with my table full of madness. I was attached to this marvelous piece of art, which I had created, and wanted to keep all for myself, mine, mine, mine!

Abstract is an understatement. It was all over the place, a true representation of self, but I liked it, no I loved it. Only I didn’t know it yet“Hemingway” couldn’t be stopped.

He wasn’t done with me, yet…

Hmmmm. What it pity it would be to keep this from the world. Shame on you! That is when I realized I was talking to myself, and I had officially lost my mind.

I thought this through, and realized I had channeled my inner Hemingway. He had been there all along, I just didn’t know it yet. "The madness all over" had been unleashed, and my love affair with "Hemingway" was only beginning to blossom.

Alas, I decided to share this maddening art work with the world again.

Only it had transformed once again, and resurrected itself back into the digital, and was reborn in the physical, in its latest form, clothing!

I am sure the evolution of “Hemingway” isn’t complete, until then I will continue to channel him, whenever I can. So stay tuned, you never know what will happen next!

Check out the evolution of "Hemingway" below: 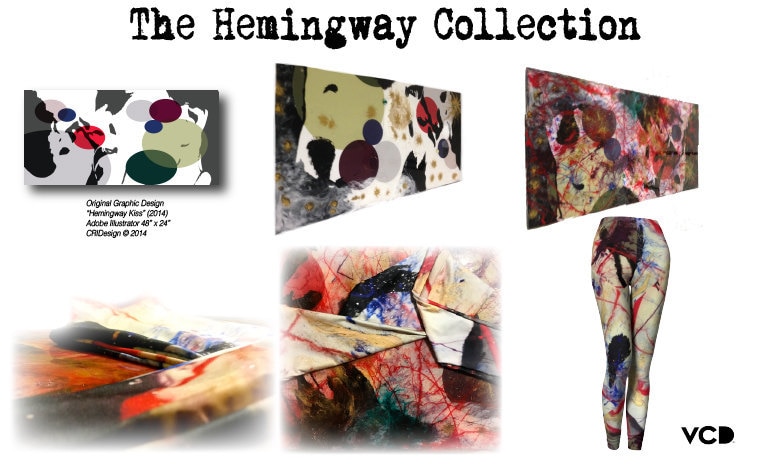